This is a version of the starting principles for a project I’ve been working on, in a number of realms.

Hello there, I’m Damien, or @Wolven in a lot of places on the internet. I make my living at writing, talking, thinking, teaching, and learning about philosophy, comparative religion, magic, “artificial intelligence,” human physical and mental augmentation, pop culture, and how they all relate. Basically, I think about, talk about, and work toward a future worth living in, and I want to do it with you.

I’m talking about a future where we have the option but not the expectation to self-cyborg. A future where, when we’re confronted with the new and unprecedentedly strange kinds of minds we’re likely to meet in this century, we can embrace the new and the strange, and use it to make ourselves even more than we already are. A future where everyone has the data, information, knowledge, and ability to conduct their lives in their communities, the best they know how.

During an exchange we were having about this article of his: “When Robots Can Kill, It’s Unclear Who Will Be To Blame,” NPR’s Steven Henn once asked me, “Ok – how would you like people to begin thinking about human created intelligent systems – to the extent they are created?”

The answer I gave was somewhat laborious, but the basic gist of it is this: As systems they’ve created and as minds they’re attempting to create and as agents they’re thinking about bringing into the world. We’re creating a class of things that exists in our minds somewhere between tools and offspring, and we need to sort out how we regard it, before it does.

But this doesn’t just extend to machine minds; it’s about systems of and networks of power and influence. It’s about recognizing that everything we make is made, and that it all carries our will, intentions, unconscious biases, and starting assumptions in it. What I want is to raise the profile of the kinds of people who are working on this, right now. People like Jamais Cascio, Dr. Joanna Bryson, Dr. David Gunkel, Emily Dare, Mikey Pryvt, Cat Vincent, Karen Gregory Scott Midson, Tommaso Bertolotti, Colin Schmidt, Ingrid Burrington, Eleanor Saitta, and quite a few more. People like me, and hopefully you. I want these names in the minds of everyone living with the possible implications of it. Which is everyone.

We need, we All need to be taking the changing pace, content, and tone of this conversation very seriously, and working toward a future where we’re not just running to catch up to the vastly changing pace of these realities, but are thinking ahead about their possibilities, and addressing their actualities As they arise. Not after. 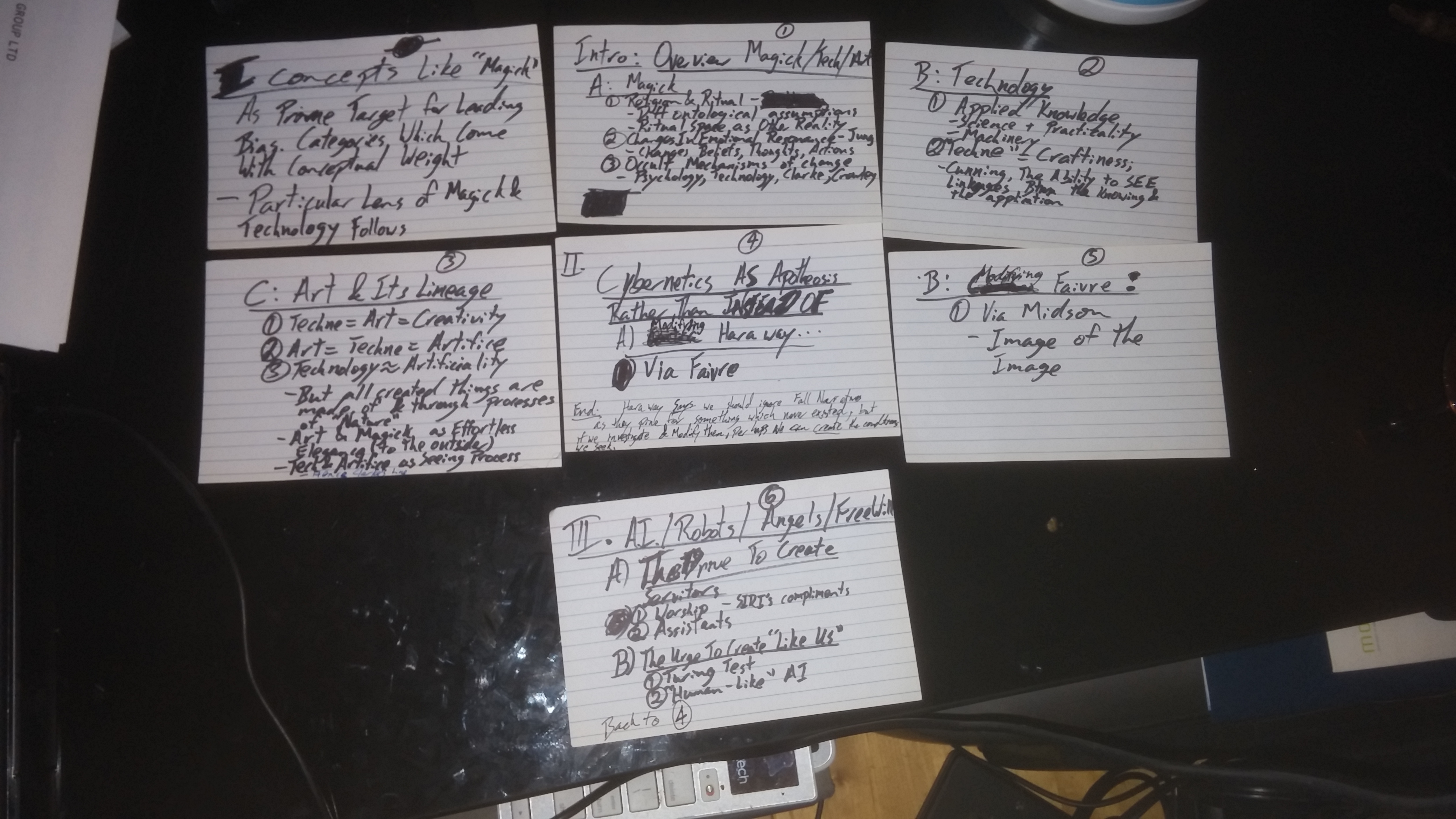 This isn’t exactly the longest introduction. It doesn’t talk about my work in blending the technological and the occult, for instance, and it doesn’t get into the specifics of the kinds of pedagogical tools I like to use to get these messages out into the world. It’s not a long post, but I think it’ll serve as an intro to what it is I’ll be doing, around here, and everywhere. As I’ve said, before:

The present looks a great deal like we thought 5-8 years ago would look like, 18 years ago, but today is…grittier. More scuffed up. Like the difference between your dream or even nightmare of visiting a place, and what it actually smells and feels like, when you’re there. The dreamshimmer is gone from our contemplation of data and systems theory and the reality presents itself as almost inherently Less.
Less hopeful, less meaningful, less potential for bettering ourselves. Like, somewhere in the path to here, we forgot Why we wanted to get here (new life and strange civilizations), and only vaguely remembered what “Here” was supposed to look like.

Where are the conscious nanotech swarms, and their acolytes? Where are the emergent-and-non-human-minds which exist in the ringback protocols, between two dozen different sites? Where are the network shamans, able to dive deep and parse the bits the pieces, from the dross of gross signal loss? Where are the bearshirters, skinning and gutting the beasts of our technological wilds and stitching their hard-edged components into softer flesh? These entities, these people, these groups exist—or Could—but as as curiosities, as freakshows, as fearfully whispered cautionary tales, when they should be our hope, our aim, our scratched out salvation from our own cynicism.

We’ll refind the quality of awe and investigative wonder and possibility, we’ll make this world, this context, this mode of life better, while we’re here. We have to, or we’ll literally die, trying or not.

And thus, a future worth thinking about.